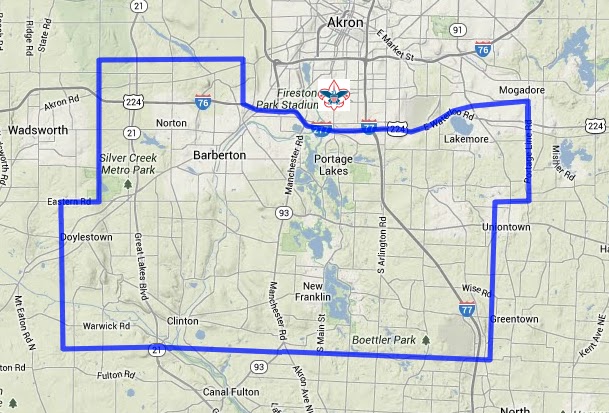 Scouting Begins in the Akron Area

It was in the Lakes District where Scouting got its start in the Akron area. On December 8, 1914, a representative of the Boy Scouts met with factory workers and businessman from the Akron area and formed the first Boy Scout Troop at the First Presbyterian Church of Barberton. Troop 101 is alive and well, and still serving youth in the Barberton community.

Our History - Our Name

Portage Lakes is named after the old Indian portage path which connected the Cuyahoga River flowing north to Lake Erie and the Tuscarawas River which through the Muskingum, flows south to the Ohio River. This proved advantageous for the Indians and early settlers as navigation from Lake Erie to the Ohio was possible with only one eight-mile portage overland. Portage Lakes State Park lies at one of the highest points of the state and on a major watershed divide in Ohio. Some water from the lakes reaches Lake Erie and some flows to the Ohio River.
The old Indian Portage Path was the ancient boundary between the Six Nations and the Western Indians. It made a great location for trade for the Delaware and the many tribes that traveled through the area.  The European settlers that came later also took advantage of the waterways and used Portage Lakes as a rendezvous point for American troops in the War Of 1812.
In 1825 Ohio decided to build a canal to link Lake Erie and the Ohio River to transport farmers' produce to markets in the East and South. By 1827 Akron was linked to Cleveland and by 1828 the canal went through Clinton and reached Massillon. Several of the Portage Lakes were built as feeder reservoirs for the canals so they could maintain the required depth of four feet. The canals were abandoned by 1913 and the lakes were used by local industries to meet their water needs. The Ohio Division of Parks and Recreation took control of the canal lands and lakes in 1949 and have been rebuilding a towpath through the area which will eventually link Cleveland to Dover.

A Great Place for a Scouting Adventure

Unique plants associated with these boggy areas can be found in the area. Tamarack trees, more common in northern boreal forests, are scattered through the park with patches of skunk cabbage and cranberry also present. Nice stands of beech-maple forest provide refuge for skunk, raccoon, white-tailed deer and many other animals. The wetlands of the park attract thousands of geese and waterfowl during spring and fall migration periods. Mallards, wood ducks and Canada geese nest in the wetlands each year. In addition, woodcock, heron, hawks, owls, red fox, beaver and muskrat are often sighted.